It’s the 15th! On the 15th of each month I try to do some kind of awareness post about Henry’s syndrome: Dup15q. It’s a rare genetic disorder characterized by an extra piece of the 15th chromosome. Here are some of my other Dup15q posts:

Rare Disease Day: Get to Know 22q and Dup15q

Henry’s Dup15q Diagnosis: 3 Things I Wish I Could Have Told Myself

For more about Henry’s story in particular, check out the page HENRY & DUP15q, and for more info on Dup15q Syndrome, visit Dup15q.org. 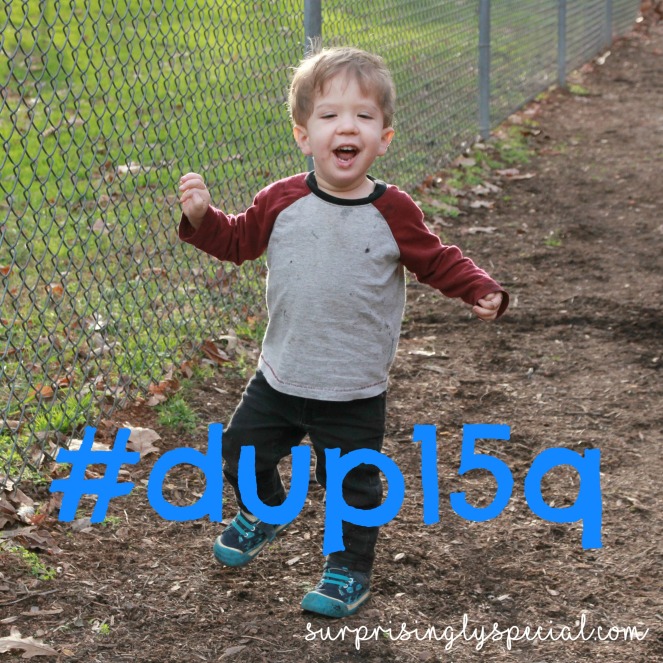 So often when talking about rare disorders like Dup15q, the emphasis is on what the individual is likely to struggle with. Yes, development looks different for kids with Dup15q. Yes, there are challenges. But that is not the whole story! Our Super Dupers are beautiful and loving and in need of love and acceptance and celebration.

So this month, I want to share with you 15 Super Special things about my son Henry with Dup15q ❤

1. Getting his chirpy cuteness out of bed in the morning.

My favorite moments of the day with Henry are getting him out of his crib in the morning and after nap time. He is all smiles and snuggles!

Henry smiles A LOT. A big, happy grin that lights up the room! It can be hard to catch a clear photo of him  because he’s wiggly, but he actually takes awesome selfies because as soon as he sees himself and me in the phone screen he smiles big and bright! 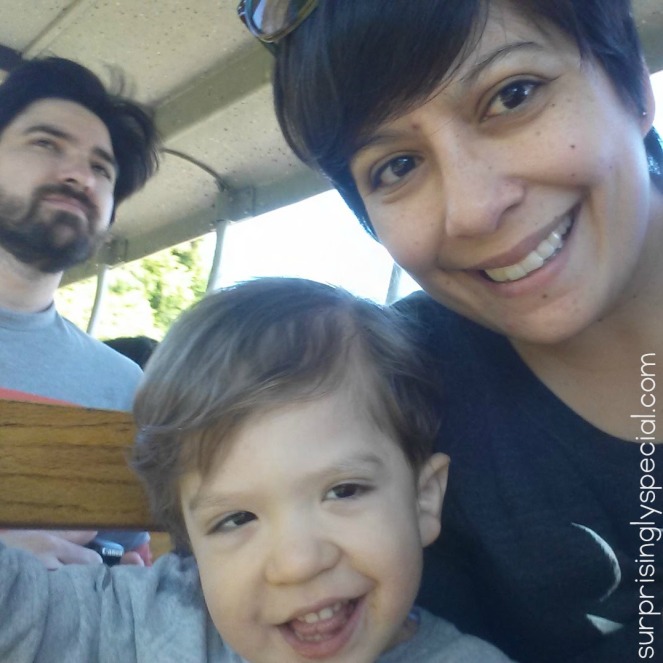 He didn’t get that nose from me or his dad. It’s actually part of the phenotype associated with Dup15q!

4. Seeing him play with his brother.

The greatest is when Calvin is repeatedly doing something that is making Henry laugh. This usually involves throwing things. Like, Calvin will be throwing stuffed animals across the play room and Henry will be CRACKING UP laughing with every throw! It’s hysterical.

5. Seeing him cry with his brother.

I know this sounds like it would be a bad thing, and it can definitely be hard in the moment, but when Calvin is crying and Henry starts crying too, I see such powerful empathy happening. Henry knows when Calvin is upset, and it upsets him too. And I can tell by the way Henry cries that it isn’t that he’s bothered by the noise of Calvin crying. His little face has heartbreak written on it. He seems to be saying, my brother is sad so I’m sad too.

6. His enthusiasm for eating.

Oh Lord, this child can eat! And sometimes it’s so nice to see his healthy appetite as his brother takes two bites of his dinner and asks to be excused. I’ve even had feeding therapists say to me “Wow it’s so great to work with a child who likes to eat!”

I like to think he gets this from me and my dad 😉 When he hears music playing he will sit and rock back and forth as he listens. His favorite toys are ones that play music.

For a while his favorite was the All Aboard Song from Dinosaur Train. Whether it was on Google Play, or during the Dinosaur Train episode, or just being sung be me (or even by Calvin!), he would get so happy and excited! Sometimes he would actually squeal! We may have worn it out by using it to try to calm him mid-meltdown too many times…

His new favorite is that If all the rain drops were lemon drops and gumdrops… song that I think I learned from Barney when my brother was little. He will actually ask for it by saying “A-a-a-a-a-a” which is the part in the song where you’re pretending to stand outside and hold your mouth open to catch a lemon drop 🙂

9. His love of movement.

On kiddie rides like a train or merry-go-round it’s amazing to see the difference in his demeanor. While we wait for the ride to start, he sits, a bit unstable, maybe a bit wiggly or wobbly. He squirms around impatiently. He might fuss. But as soon as the ride starts moving his whole body changes. It’s like his muscles wake up. He sits up straighter and sturdier. His eyes widen and brighten. He looks out at the scenery streaming past and sometimes he smiles or laughs, sometimes he is just calm.

This pic is from Disneyland almost a year ago. He looks so little!

10. Watching him entertain himself.

When we’re at home where everything is familiar and safe, Henry is happy to just kind of roam around and explore. Sometimes he will take a ball from our ball pit and throw it, then crawl to it, throw it again, and repeat over and over so that this throwing and following game takes him all over the house. He likes to kind of throw plastic jar lids or teething rings so that they spin and make clattering sounds on tables or on the floor. It’s just interesting to see the little things he does to play independently. Like games that he’s made up  for himself.

We can see his receptive language growing in the way he responds to us. And there are things we can’t sneak by him anymore! Like, James and I will sometimes try to eat something different from what we put on the kids’ plates at meals. Calvin was always indifferent about it, and for a while, Henry never noticed. But now, if Henry sees something on my plate that he wants, he’s after it! He know’s what’s up!

12. Seeing him find a way to ask for something.

Henry is nonverbal and the few signs he uses are very inconsistent. But he does find ways to communicate, and sometimes he manages to communicate really specific things, like the way he will say “A-a-a-a-a-a” when he wants to sing his latest favorite song. Every little inch of progress with communication feels so special because it gives us glimpses into Henry’s mind which is still such a mystery.

Henry took his first independent steps just 5 months ago from me to his speech therapist! He was 2 years and 4 months old. All of his motor milestones were “delayed” and each one took not just time, but effort and therapy as Henry slowly grew strong enough to sit, then crawl, then pull to stand, then walk with a walker, and finally to walk independently. It was just two months ago that he was finally strong enough to stand up without pulling on something for support. The runway is longer for Henry, but seeing him make progress is a sweet reward!

I don’t think there are any baby books with a page for “Baby’s Last Time Needing Thickener” or “Baby’s Finally Off Reflux Medication!” But those were HUGE milestones for us! (See the HENRY & DUP15q page for some explanation on those.) Other unusual milestones have included: First Time Using Real Fingerpaint Instead of Yogurt!  Made it Through Group Speech Therapy Without Crying! First Steps with a Reverse Walker! And, Baby’s First BiPAP Ventilator!

So many things we could never have known we’d be so thankful for!

Sometimes I wish that parenting Henry was just the snuggling part. I mean, there are other great parts, obviously, but he is absolutely the sweetest, most affectionate snuggler I have ever had the privilege of snuggling with. He gives me big, drooly kisses all over my face, and then nuzzles his little soft baby face into my neck and wraps his arms around me to give me a tight squeeze! Oh I love that sweet boy. And he sure loves me. And is there anything more special than that??

Dup15q parents, what are some super special things about your Super Duper?