We have been spending time with grandparents and cousins, getting lots of sun, having lots of fun, and very much enjoying our summer. In my own effort to relax as much as possible I have been letting the blog go by the wayside a bit, but here I am, doing a little summer catch-up starting with Henry’s birthday!

Look at this big boy!!

The year from his second birthday to his third brought a lot of big and exciting changes for Henry. Like many other kids with Dup15q, Henry was not walking by his second birthday. In fact, at that time, he was really just starting to “cruise” around by holding on to furniture and he could only stand up by pulling him self up and holding on to something.

Last summer, he started using a reverse walker to enable him to walk around independently and in November, just as we were preparing for our big cross-country move, he took his first independent steps. It took a few more months for him to build up the strength to stand up from sitting without pulling on something and now he can stand, sit, squat, walk, and run! He’s got a ways to go in terms of balance and coordination, but he has made leaps and bounds in the past year.

As Henry has gotten older, some things have gotten harder. He is more aware and more opinionated – which is great! But with his difficulty communicating, it is very frustrating for all of us and he’s developed a habit of biting his arms in frustration. Still, we can tell that he’s developed a lot in his receptive language, his ability to understand us and respond to us when we talk to him.

At his second birthday, Henry was still using a pacifier and it was tempting to hang on to that sucker for as long as possible because of Henry’s oral sensory needs. But he was getting to be a big boy and I was a stubborn mama, so just a couple of months after his second birthday I took the paci away cold turkey and tried diligently to replace it with a variety of other sensory toys – chewy tubes, wooden teething toys, plastic teething toys, vibrating teethers, I tried so many things and still it was probably eight months before he took to wearing a chewy pendant to help with his biting and licking habit. Now, I am happy to report that the chewy tubes and pendants are a big help for him!

So we have a lot to celebrate for our Super Duper, Henry! He sees and experiences the world in ways we can’t totally understand, and he’s stuck with us “typically developing” parents fumbling along trying to help him and care for him as best we can and he loves us anyway and we love him dearly.

The tradition of Birthday Breakfast is a big deal at our house. It usually involves putting sprinkles and candles on some already sweet breakfast foods like pancakes, or donuts, or one time, even smoothies because Calvin was on a “soft foods” diet following his palate surgery. But it’s really about the birthday person, right? And ya know what Henry really loves for breakfast? I mean, he’ll eat all that sweet stuff and be happy about it, he’s not picky, but this kid actually loves a plate of eggs. So much that he has been known to aggressively insist that his dad share his egg sandwiches with him, and to grab fistfuls of scramble from any plate within his reach. So, for Henry’s birthday breakfast we skipped the sprinkles and candles and went for a hearty meal of bacon and eggs with James’ homemade buttermilk biscuits. Delicious. (That’s Henry and his Granny, my mom, taking a birthday breakfast selfie. My parents were able to be in town for Henry’s birthday 🙂 )

We took Henry to a nice spot at the river where kids can splash in the shallow water and play with the big, smooth river rocks and the bigger kids can catch frogs and snails and other slimy things. At first, it looked like the outing was going to be a bust for the birthday boy. He was acting fussy and didn’t want to get in the water. But after a snack and after spending some time sitting on the bank with me and his grandparents, James took Henry back out into the water and Henry apparently changed his mind and decided that playing in the river was a fun birthday thing to do after all. Calvin also had a blast.

Since Henry’s birthday was a very hot July day here in the southeast, I thought birthday ice cream was a good idea instead of a birthday cake. We took Henry to Goodberry’s, a frozen custard place that we had been to before and that Henry had liked in the past. On his birthday, however, Henry seemed to feel that it was just too d*** hot to be outside after 3 o’clock, ice cream or no ice cream. He protested his vanilla with sprinkles, candles and all, and fussed and complained until we were able to get him a cup of ice water. 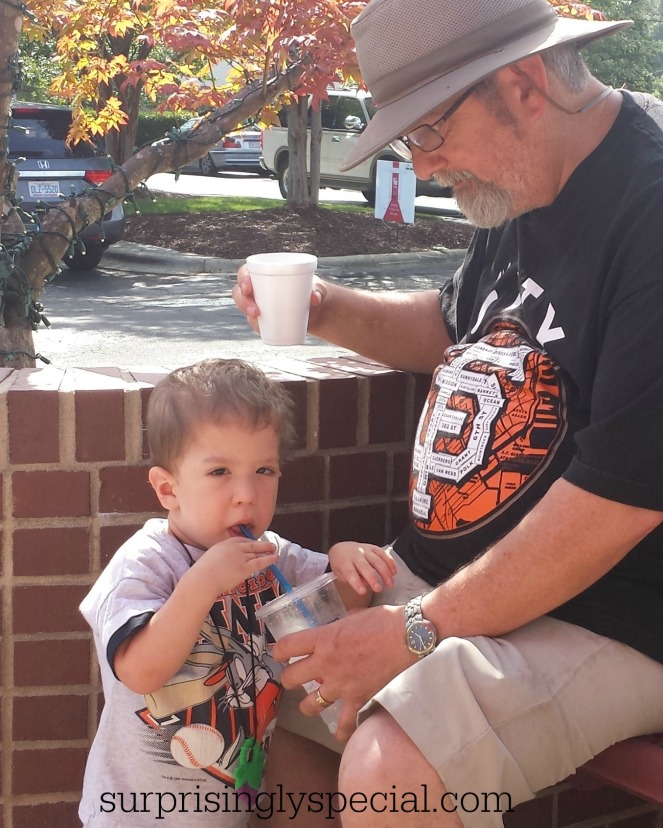 Here’s Henry and his Danpa with the ice water. Apparently the birthday boy was very thirsty. His brother was happy to help eat the birthday ice cream that Henry had refused.

Henry got a few fun new toys including this awesome musical ride-on toy from his grandparents and his very own sit-and-spin from a family friend.

Despite the ice cream vs. ice water business, I think Henry had a happy birthday and the rest of us were sure happy to celebrate him.

Here’s to another big and exciting year for our 3-year-old, soon-to-be preschooler Henry!