Calvin and Henry both started school on the same day, at different schools. Calvin’s transition to school has been easy. Henry’s has been a little more complicated.

Since Calvin goes to the school where I teach, he can ride with me in the morning and afternoon. At the end of his school day, one of his teachers walks him over to my classroom and he eats a snack and reads or plays on the tablet while I do a little work after school.

Calvin loves school, and had been in preschool before, so he knew what to expect and was excited about starting school again. He had a great first day of school and a great first week of school. When he comes to my classroom at the end of the day he’s always in a good mood. My students are very sweet to him. One boy in my class even brought Calvin animal crackers for a snack because I had told them how much Calvin loves animal crackers!

Since my school doesn’t have a special education preschool class, Henry is at a different school. He is supposed to ride the bus to and from school, but on the first day, his dad dropped him off and his nanny picked him up. Since then, we have been having trouble coordinating with the bus transportation. So far he has not been picked up by the bus in the morning and we’re not sure if it is because the bus isn’t stopping, or because we have the wrong information about where his bus stop is. The afternoon bus has been no problem and his nanny comes to the house to get him off the bus and take care of him until I get home. We’re still trying to figure out the morning bus, and in the meantime, James has had to bring Henry to school on the city bus.

Henry had a hard first day of school. This is his first time in preschool and his first time away from home for such a big part of the day. He goes to school just 3 days a week, but they are full school days. That first day,  when James first brought him into the classroom he went right in and started exploring while James was talking to the teachers. But when James was ready to leave, Henry started fussing. James left, with Henry still upset, but before James could make it to work he got a call from the teacher saying that Henry was having a fit and biting his arms. We had forgotten to put a “chewy” necklace on Henry (a sensory tool he uses to help keep him from putting other things in his mouth). His chewy necklaces don’t actually help much with the arm biting when Henry is really upset. The only thing that helps him stop biting when he is upset is to get him calmed down. But James went back to the school to bring him the chewy necklace.

Henry was having a meltdown, but the teachers wanted James to go and let them be the ones to help Henry calm down since, of course, James won’t always be there at school. So James left again, with poor Henry still so upset.

When our nanny picked him up, Henry was calm. The teachers told her that he had had a hard morning, but that he had eventually calmed down and that the rest of the day was OK. I spoke with the lead teacher later, and she said he calmed down when they put him in his stroller (he has a stroller at school to get around since he is still building up his walking stamina and stability). She was really concerned about the arm biting, and I am sure that was distressing for the teachers to see. It isn’t a big problem at home because he  is generally calm and feels safe at home. I believe that once he starts to feel comfortable at school, he won’t have meltdowns or bite as much, and then we can work with his therapists on giving him ways to communicate and ways to deal with his big feelings so that hopefully he won’t need to bite himself anymore. The way I see it, step one is to help him feel comfortable at school. Only then will they be able to work on anything else with him.

His next two days of school were better. No calls from the teacher about arm biting. She even texted me a picture of him playing :). 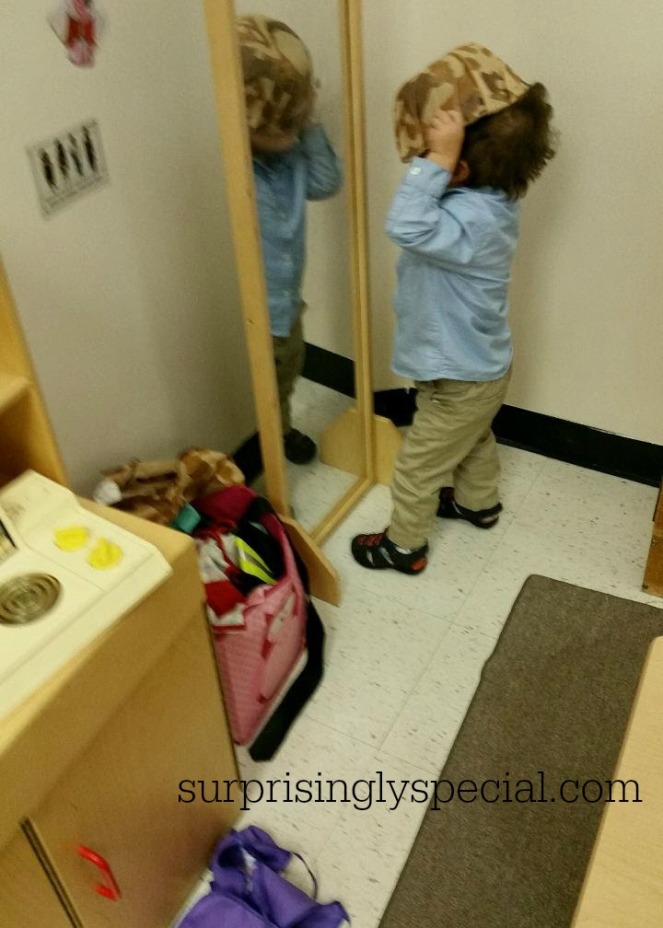 I’m optimistic that Henry will become more and more comfortable at school. And hopefully we can get the bus situation figured out soon!

For me, the first two weeks of school are in the books. My students are very sweet. Like every class, they have their strengths and their areas to improve – both individually and as a group. And I feel privileged to be a part of helping them grow and learn this year.

Teaching is exhausting. I knew from experience that it would be, but it is still a struggle to get used to this level of busy-ness and the amount of energy I am needing to put into my job. The thing about teaching is that it’s not only physically tiring, it’s also emotionally tiring. But we get what we give, right?? Give positive energy, get positive energy. Give love, get love. Give your heart, get it back even fuller. This is what I’m telling myself, anyway!

We’ll all get the hang of it. We’re past our big first days of school, and now we’re getting used to our two working parents, two kids in school life. It’s a busy life, it’s a full life, it’s a good life.

6 thoughts on “First Days of School”