We are enjoying a relaxing holiday break at James’ parents house up in the north Georgia mountains. The view is beautiful; the weather is chilly. We arrived in the evening on Christmas day, and the house was full and bustling with 4 of James’ 5 siblings with their significant others, plus James’ parents, and 13 of our 14 nieces and nephews! We had made the drive down from North Carolina in record time – a Christmas miracle! – both boys did so well during the 5 hours in the car. We had bundled them into their car seats still in their Christmas jammies and they watched Christmas Thomas the train movies and napped and ate snacks all the way to Georgia.

Christmas morning with Calvin and Henry was really fun. They had actually slept in unusually late and had to be woken up so we could get things going since we were driving to Georgia later. When they came downstairs they were in a kind of quiet awe at the scene of toys and gifts laid out under the Christmas tree. They were kind of funny, actually. They approached their new goodies slowly, almost cautiously, glancing up at the grown ups as if to make sure it was OK for them to touch all the new stuff 🙂 Calvin went immediately for the train set and the new roundhouse, and Henry was drawn to the bright green Bilibo.

Calvin had been really sick all week and we were worried that he wouldn’t be able to enjoy the holiday, but he perked up right on time on Christmas Eve and was able to come to church and see the Christmas pageant that day. Christmas morning he seemed to have his energy back and then he was able to get a long nap in the car.

Even though we still had to pack up and get on the road, we took our time and had a relaxing morning while the boys enjoyed their toys and we all opened our gifts. 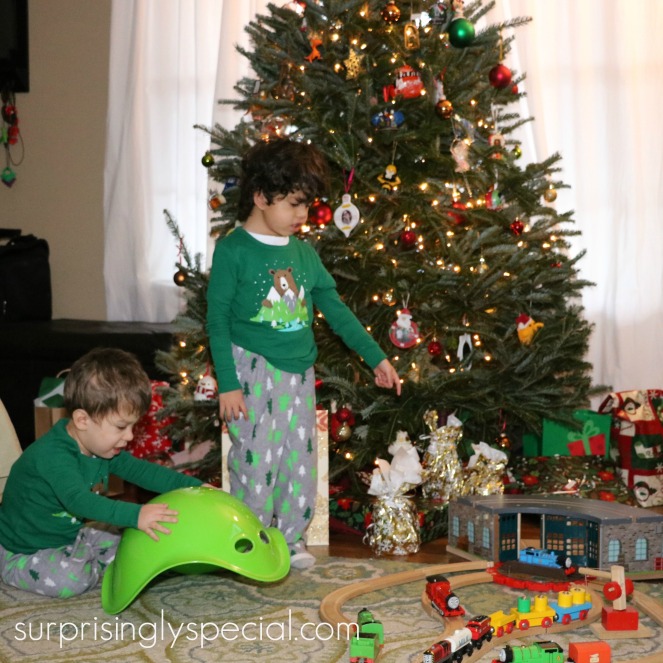 Our attempt at a lovely family photo did not turn out so well… 🙂 But we did get some sweet pics of the boys in their matching jammies. The matching Christmas jammies are a tradition for Calvin and Henry.

We have been spending the rest of the week taking turns being sick and enjoying time with James’ family. We are *almost* all well again, though the runny noses are always the last thing to go.

Hope you and yours had a very happy holiday, and fellow teachers out there, I hope you are getting lots of rest during your winter break!!

One thought on “A Calvin & Henry Christmas”