Valentine’s Day is just around the corner! We got our cards mailed out to C & H’s grandparents yesterday. Hope they arrive in time!!

This year I was being really stingy about spending money on Valentines toys or craft supplies. So I bought two bags of conversation hearts for $1 each, and I set out to come up with a bunch of different ways to play with just those little rainbow heart candies and whatever else we already had at home. 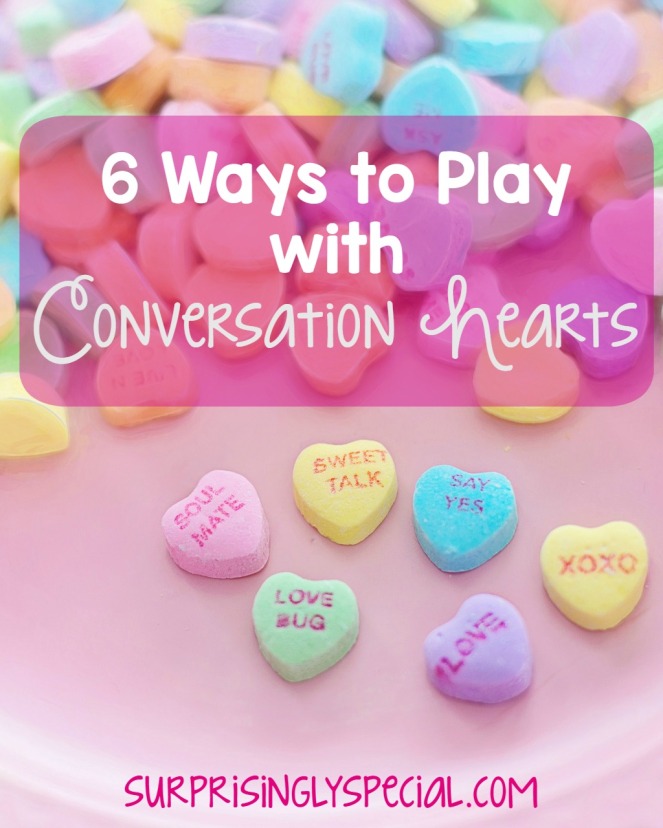 Here’s what I came up with!

I gave the boys whipped cream, rainbow sprinkles, and conversation hearts and expected them to dig in! Calvin, never the one to get messy, carefully played with his concoction with just the tips of his fingers and enjoyed scooping sprinkles onto his plate. I often let him include his little dinosaurs in our sensory play because sometimes the dinos entice him to actually get his hands messy. 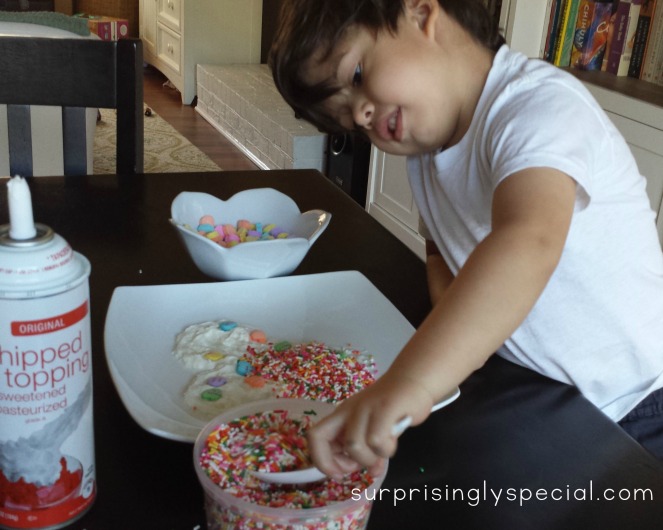 The real surprise for me was Henry! I thought for sure he’d be all over this plate of whipped rainbow sugary goodness. But he wouldn’t touch it! I gave him a spoon to see if that would let him know it was edible… and so he played with the spoon. SMH. 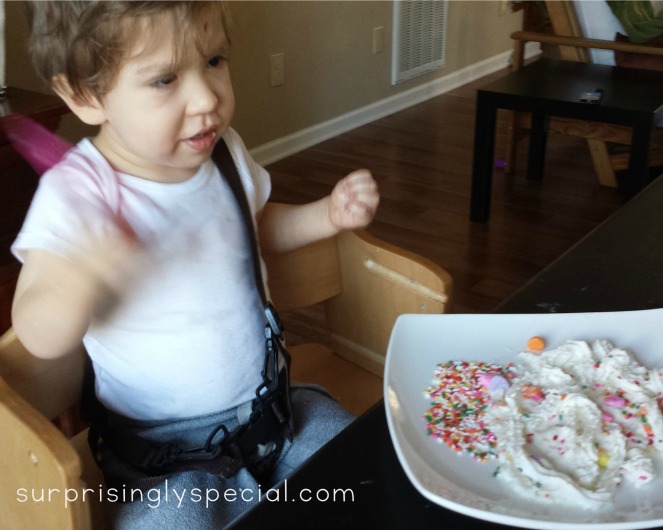 Ok, sometimes kids need a little encouragement to get messy. Even Henry, apparently. It’s the getting messy part that is good for their little brains and nervous systems. So I didn’t give up on this activity. Instead, I took the plate out of the picture and put the cream and candies straight on the table in front of Henry. Then I gently took his hands and he let me put his hands into the whipped cream and smear it around. Once he started to feel it, he started playing on his own.

I have seen therapists do this: gently putting the child’s hand into the sensory substance. Calvin typically resists this. If the kid resists, or tenses up, I’d back off. I don’t want to add discomfort to an already out-of-comfort-zone activity. This is why with Calvin I try other ways to get him engaged, like bringing in his favorite dinosaurs. With Henry, though, it worked.

Yes, this is just a handful of conversation hearts in a jar. Maybe that sounds lame. Calvin thought it was a little lame. But ya know who did not think it was lame?? Henry! Henry loves that jar of hearts. I love it when so much joy comes from something so simple!

I saw this idea over at Stir the Wonder and I got the instructions for making the catapult from Kids Activities Blog. You need about 7 craft sticks, 4 rubber bands, a bottle cap and some glue.

The boys really got a kick out of sending those little candies flying! We even measured out the distances in paces. (Most of them didn’t go very far, but Calvin has little feet!)

You guys. This was So. Much. Fun. I highly recommend sitting in your driveway and smashing candies with a hammer. I think it is excellent stress relief and way more fun than Candy Crush! Calvin loved it too. Henry mostly stomped around on our candy crumbs.

I feel like I should add, though, please use common sense if you do this with your toddler. Watch them carefully with the hammer and make sure all little fingers and toes and faces are out of the way.

Conversation hearts make pretty artwork, don’t you think? I glued scrapbook paper to pieces of cardboard so that our candy mosaics would have a sturdy backing. As you can see, Calvin was more interested in munching on the candies than gluing them…

When I taught first grade, we would always use conversation hearts for math around Valentine’s day. They make great little counters and they’re also useful for patterns and graphing. Working with Calvin on patterns was so tough! Definitely a new concept for him. I tried to introduce patterns to him last year, with the same result, and I guess we didn’t talk about it much between then and now. Gotta remember to keep working on that skill.

My favorite by far was the hammering!! Give it a try, it’s so satisfying. Plus, when you finish, your driveway will look like a rainbow:

One thought on “6 Ways to Play with Conversation Hearts”