When we found out our first baby, Calvin, born with 22q deletion syndrome, was going to be a big brother – and much sooner than we expected! – I tried to imagine what the future would hold for him and his baby brother. With no reason to worry about a genetic anomaly affecting my second child, I was expecting this new baby to be the “normal” one. I was bracing myself for the possibility that baby brother, being only 15 months younger, would quickly surpass Calvin in his development. I was trying to imagine what it would be like in a couple of years if baby brother was taller, talked first, learned faster, and was stronger and healthier than Calvin.

As usual, I was worrying about all the wrong things. My second son is not the “normal” one, in fact we don’t even have a “normal” one if normal means neurotypical, or typically-developing, or having exactly 46 chromosomes. As life turned out, Henry was affected by a genetic anomaly: dup15q syndrome.

So instead of being surpassed by his baby brother, Calvin actually got to walk first, talk first, and be the taller (at least for now!), stronger, and healthier one. Although they both have additional needs and unusual development, they get to experience the big brother – baby brother dynamic in a pretty typical way.

Here are some things that strike me about my 22cutie being a big brother: 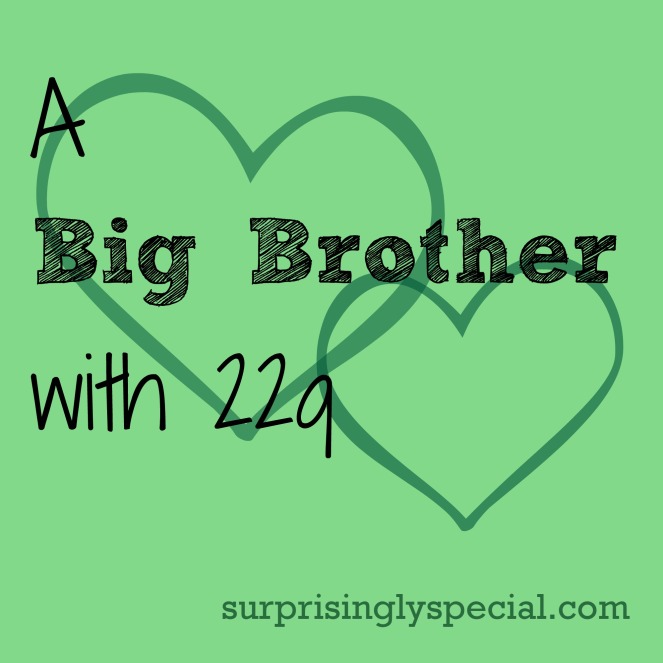 He may be small, but he’s capable.

At 3 yrs 10 mos, Calvin is still in the single digit percentiles for weight and height. I mean he’s a part Filipino kid with 22q deletion syndrome, he’s always gonna be small! So far Henry is still one size smaller than his big brother, but I think nobody will be surprised when Henry passes Calvin in height. Calvin was also on the late end of normal for hitting his motor skill milestones.

But Calvin is very independent and capable of doing lots of things for himself. He uses little stepstools around the house to help him reach light switches and counter tops and the bathroom sink. And like many first borns, he’s also a stickler for safety and rules. So, while I still keep an eye on him just in case, I don’t worry too much about him using his abilities for mischief. Instead, it’s such a relief that he can help set the table, put his own plate in the sink, help me find things around the house that my mommy-brain has lost track of, and even use the potty and wash his hands all by himself (Hallelujah!!) while I’ve got my hands full with Henry.

He has pretty serious speech problems, but he talks and even sings to his brother.

Calvin’s receptive language and vocabulary are great. His biggest challenge is articulation. He still pronounces almost no consonants when he talks. It’s really difficult to understand him. But he does talk! He narrates while he plays, he tells us things and asks questions and he even loves to sing! And the sweetest thing of all is that when Henry is crying, Calvin will start singing Henry’s favorite song from Dinosaur Train (the All Aboard song) to try and cheer up his baby brother.

They both have a lot of medical appointments and therapies.

Doctor appointments, therapy sessions, and even surgeries are very much shared experiences for my two kids. It’s helpful in that Calvin is used to it and knows what to expect from a trip to the doctor’s office or a visit from a therapist. Calvin has also gotten to sit in on Henry’s therapy sessions and interact with Henry’s therapists. For a little while, they were even in group speech therapy together.

They have their share of sibling friction and brotherly love.

Oh, the toy stealing, the pushing, the I wanted the green spoon! and Henry broke my train track!  and Don’t sit on your brother!! – all those typical sibling conflicts definitely happen around here. And it was weirdly kind of a relief when it started happening, because it was a side effect of the two of them being able to interact and communicate. One of those things that I suspect feels different for parents of kids with developmental delays.

But Calvin and Henry also find ways to play together. Mostly chasing each other around and wrestling, both laughing hysterically with glee until it inevitably goes too far and someone ends up in tears! They can share a snack, Calvin carefully handing Henry one goldfish cracker at a time, or share a water bottle – even the green one. Whenever we talk about plans to go somewhere, Calvin always asks, “And Henry, too?” as if to make sure we aren’t going to forget his baby brother. When Henry is crying, Calvin brings him his favorite toys and sings to him to try to calm him down and cheer him up. And when Calvin is crying, Henry either comes over and tries to pat him on the back, or starts crying too, because solidarity!

They melt my heart every day. And I am so proud of what a good big brother Calvin is.

On the 22nd of each month, I will dedicate a post to raising awareness for Calvin’s special syndrome: 22q deletion. It’s the second most common genetic disorder after Down Syndrome. It is often known as DiGeorge Syndrome or Velo Cardio Facial Syndrome (VCFS). For more about Calvin’s diagnosis and how 22q has affected his development, check out our page Calvin & 22q Deletion. For more info and resources about 22q deletion syndrome, check out the International 22q11.2 Foundation at 22q.org.