When I spotted this popcorn cherry blossom tree craft from Glued to My Crafts on Twitter this week I was like, we have to do this! It fit all my craft project criteria: Easy [check]. Seasonal [check]. Developmentally appropriate for at least one of my kids [check]. Safe for Henry [check]. I already have all the materials [check]. It’s a go! 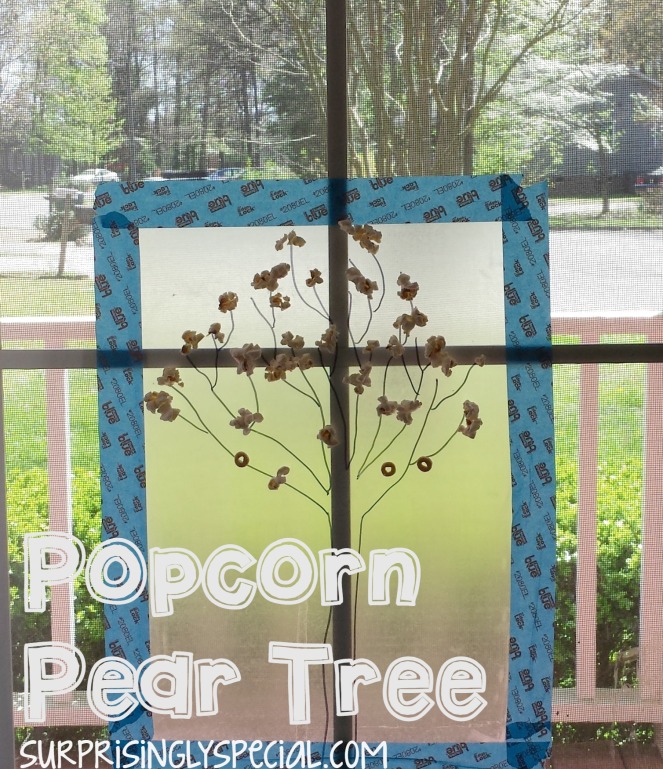 Instead of a cherry tree, I’m calling ours a Popcorn Pear Tree because where we live the Bradford Pear trees were some of the first spring blooms we saw (and smelled!). For the past few weeks it seemed like there was a row of bright white blossoms around every corner! Now most of the pear trees have traded their white flowers for green leaves, but thanks to this art project we’ve got a couple blooming in our own playroom – and they smell way better than the real deal!! 🙂 If you’re not familiar with Bradford Pear trees, they look super pretty all covered in white blossoms, but they stink to high heaven like something oddly fishy…

Anyway, I started out by trying to think of a way to adapt this art project to make it accessible for Henry. I didn’t feel ready to attempt a gluing project with him, though I think he might be ready to try gluing with lots of help… I just wanted to keep it simple and fun. So I thought using contact paper would be a brilliant way to allow both kids to stick some popcorn blossoms on the tree pretty easily. (In theory…)

I drew a tree onto the contact paper before peeling it off and taping it to the window. Then I set out a bowl of popped popcorn to stick to the tree as the blossoms. It looks great doesn’t it?? But, ok, here’s the confession: I was the only one who succeeded in getting the popcorn to stick to the contact paper. Womp womp. We used kettle corn, because it’s what we had on hand, but plain popcorn with absolutely NO BUTTER or grease would be the best. The kettle corn was just a teensy bit greasy, just greasy enough that Calvin and Henry couldn’t get it to stick. Not that they minded. They were perfectly happy munching away while I stuck kernels to the contact paper.

When one of my brilliant ideas doesn’t work out, I always try to think up an alternative on the spot. This is a skill that I used often back in my days as a first grade teacher. So when the boys couldn’t get the popcorn to stick to the contact paper, I pulled out some construction paper and glue to do something more like the original cherry tree craft that I had seen.

Calvin is a pro with a bottle of Elmer’s glue, so he was able to get into this new version of the popcorn art project. Meanwhile, Henry, who is a pro at eating, continued to entertain himself by stuffing his face with popcorn! 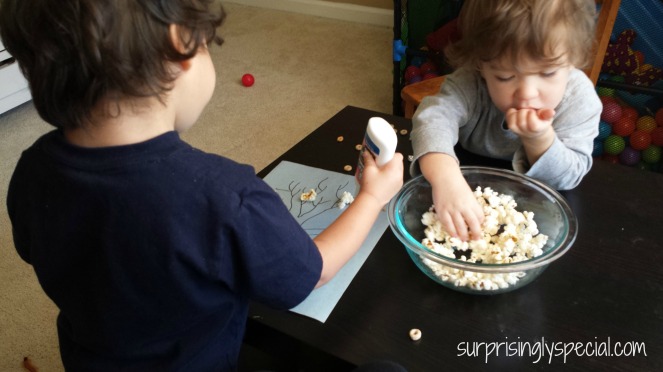 Oh, the Cheerios are there because I thought maybe they would stick better to the contact paper, but no luck.

So the Popcorn Pear Tree version 2 turned out pretty and cute and was actually made by my son and not by me! 🙂 Ok I helped. But it was mostly him. I swear. 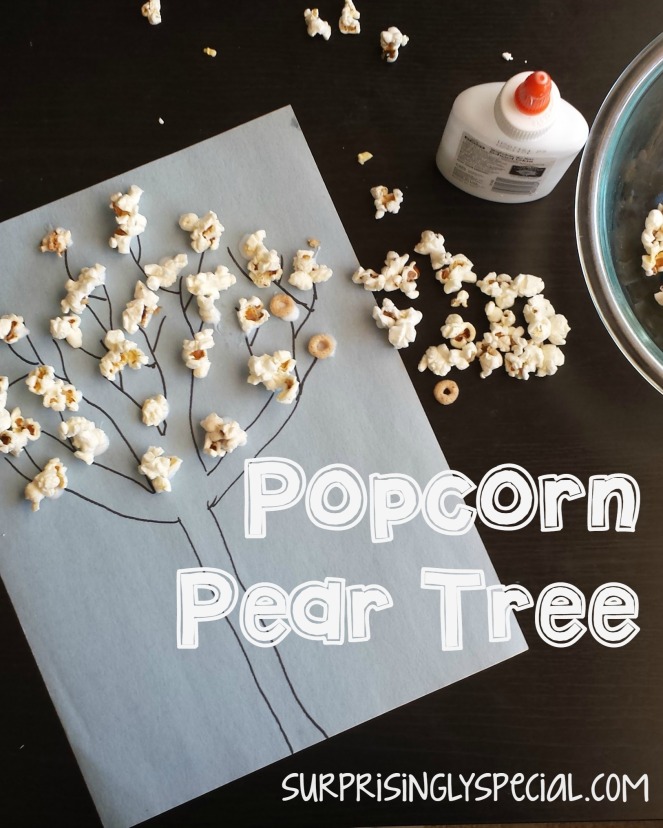 I love an art project that doubles as a snack. Those are the best for Henry!

Now, if you’ll excuse me, I need to go vacuum a bunch of popcorn off the playroom floor…