The type of speech therapy that Calvin does is called articulation therapy. He needs help working on pronouncing sounds and words. His language and vocabulary seem to be pretty on track for his age. He talks in full sentences, he carries on conversations, he can go on and on about his favorite dinosaurs… the only hang up (and it’s a big one) is that it’s very difficult to understand him with his articulation problems.

In particular, he has trouble forming consonant sounds. In the past, he was working (felt like forever!) on “bilabial” consonants – meaning, the consonants you make with both lips like /m/ and /b/ and /p/ sounds. At the moment, his new speech therapist has him working on sounds made in the back of the throat: /k/ and /ng/. In fact, he can do the /ng/ sound, so she has him using that to help him make the /k/ sound. She’ll have him say things like: ng-kite adding the /ng/ to the beginning to get him to make the /k/ sound.

The other day, we were playing with one of our memory matching games and I suggested that we do a sound sort. I would say the names of the pictures and we could sort them by what sounds the words started with. This is the sort of thing I would do with my first graders when I was a teacher. It was over Calvin’s head. But while I was sound sorting I noticed that a lot of the memory game cards had words that started with the /k/ sound which Calvin has been working on in speech therapy. So I thought perfect! We can do articulation practice while playing this memory game! 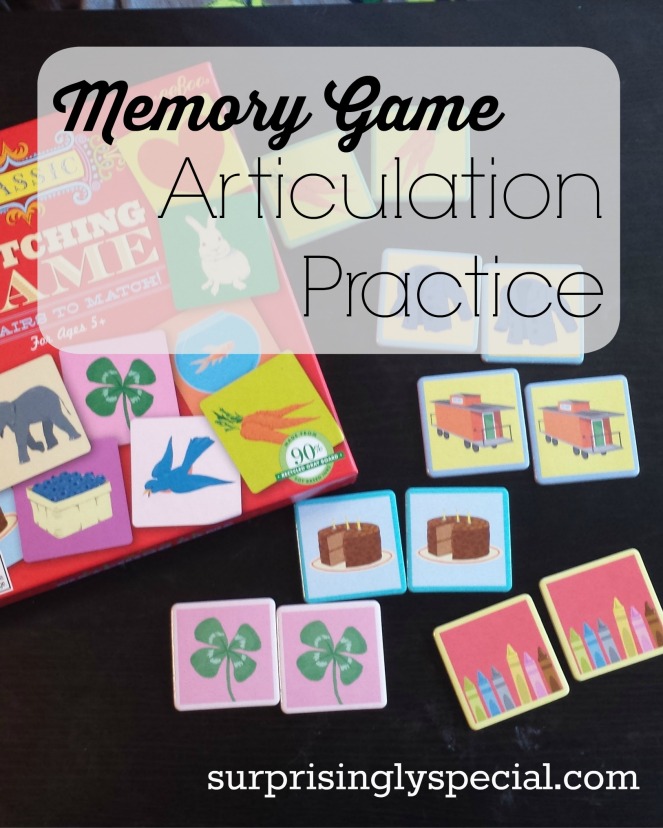 I took only the cards that had words starting with /k/: crayons, cake, caboose, clover, coat, and carrots. We shuffled them up and lay them facedown in a grid.

Then we played the classic memory matching game where each player takes a turn turning over two cards and if they match, that player keeps them. If they don’t match you’re supposed to put them back where you found them and remember where they were, but if you’re 3-almost-4-years-old you’re likely to cheat and just start flipping over more cards to find a match.  *Mom shakes head.*

To add the articulation practice, whenever we flipped a card over, we said the name of the picture out loud and I also had Calvin use the /ng/ trick that his speech therapist had him doing. ng-carrots, ng-coat, etc.

I’m not a speech therapist, so when I try to practice with Calvin, I just imitate what his therapist does or follow the instructions she gives me. I should get a video of Calvin talking to share here. I wish I could get a video during speech therapy, but I’m always wrangling Henry in there!

I love a simple picture matching set for language activities. If you don’t have a game like this one, you can just print out some clip art or even make one with stickers on index cards or printed craft paper like the one I made for Sagan’s Busy Bag. It would be even better to have the words, or at least the starting letters printed on each card. You can do all kinds of sound sorts with a set of picture cards: sorting by beginning sounds, ending sounds, vowel sounds, alphabetizing… Or you can sort them to work on vocabulary: vehicles, foods, clothing, animlas, etc. And my favorite thing to do with slightly older kids is to do a “free sort” where the kids come up with their own categories and then explain their thinking! Haven’t tried that with Calvin yet, but he sorts and organizes his dinosaurs on his own all the time!

Got any speech therapy or language games to share? I need to be better about practicing with Calvin at home, so I’m open to ideas! 🙂