I’ve added a new feature to the blog and have become an Amazon affiliate!

Please note: This post contains affiliate links to Amazon products and I may receive a small commission for providing links to these products.

Space is probably my favorite theme for tot school! It was really fun with Calvin this year because he was really able to learn and talk about the planets and the sun. He was particularly inspired by the planets song from Blues Clues and sang it nonstop for weeks. We changed the last line about Pluto to make it clear that Pluto is a dwarf planet, and I think that really got his attention because the next thing I knew, he was asking to get a book about Pluto from the library and taking about “dwarf planets” all the time. It was interesting reading the book he chose about Pluto because it was full of “artistic interpretations” of what scientists thought Pluto looked like and it was published in 2006 when the New Horizons spacecraft had just been launched, headed for our favorite dwarf planet. New Horizons reached Pluto last year so we were able to get online and look at the new, detailed photos of Pluto’s surface.

Here’s how we played to learn about the Solar System! 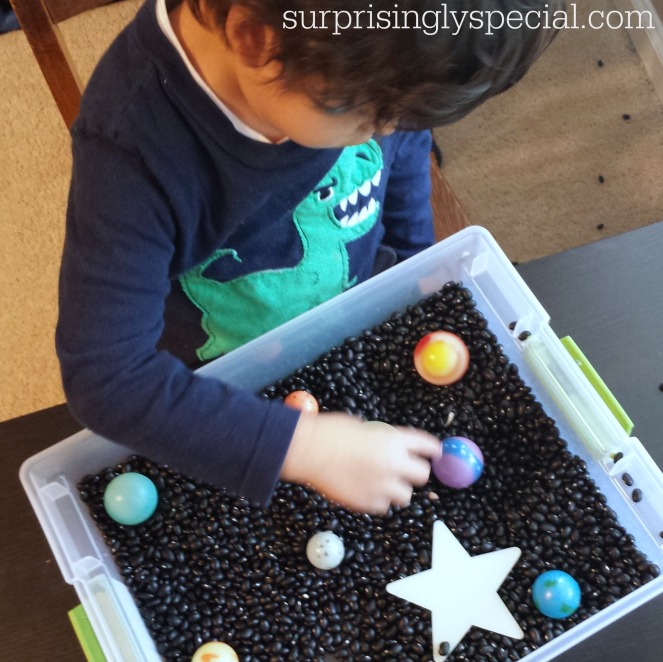 I used dry black beans as the base of this sensory bin. I have used black lentils in the past which have a nice texture since they’re smaller than beans, but I’m so glad I didn’t use lentils this time because the beans weren’t too hard to scoop back into the bin as Henry was making them rain all over himself. This first day with the solar system bin, Calvin was so patiently identifying and arranging the planets, and Henry was just reaching in over him to grab handfuls of beans to sprinkle all over the place!

Our little planets are University Games 3D Planets in a Tube

(Pluto included! The package actually says “8 planets + Pluto”) and we used these for almost every activity. Calvin even carried them around with him during the weeks we were studying the solar system and sometimes he still sleeps with them in a little box beside his bed! 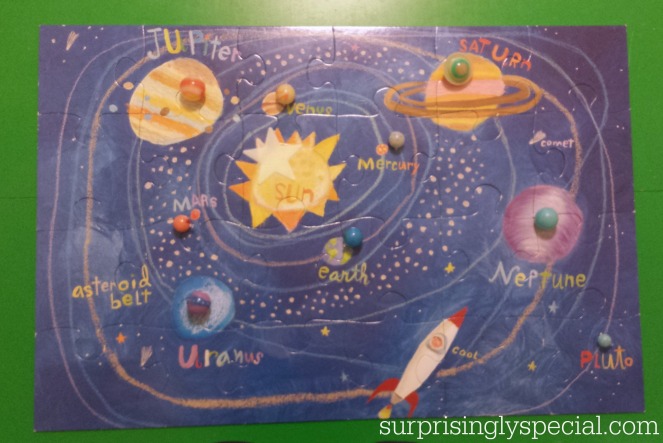 All aboard for a train ride through the planets!

We had put together the floor puzzle on our train table and then Calvin wanted to build a train track. So instead of cleaning up our puzzle, I got the idea to build our train track through the solar system! It was super fun. We put the passenger car on the train and chugged our little space explorers around to all the planets (and one dwarf planet!) and the sun.

The 3D planets glow in the dark and we also have a set of glow-in-the-dark stars and planets similar to this one: 4M Glow Planets and Nova Stars. Calvin and I shut ourselves into his closet to get some darkness and I showed Calvin that when we shone the flashlight on the shapes for a few moments and then turned it off, they would glow brighter.  And of course we sang our favorite song about the solar system :).

It wasn’t totally dark in the bathroom since it’s summer, but it was dark enough for the boys to enjoy our glowy galaxy bath. That is a weird picture because I had a really hard time getting a pic of our bathtub full of glow sticks and glowing planets and stars, but trust me, this is a really fun way to do bath time!

I wanted to do a sensory activity that would be Henry-friendly, so I put together a simple water play set up with a bowl of water, some scooping tools, glitter, and big circle sequins that remind me of planets. Henry had fun swirling the big spoon around and sort of fishing around in the water to try to pick up the sequins. I even had him help me shake the glitter into the bowl.

I like doing “invitations to play” with play dough where I give Calvin a tray with some play dough, some cookie cutters, and some things to decorate or add on. I have this massive 101-piece cookie cutter set that we only use for play dough because I do not bake. This one was inspired by the sun! Once he had cut out and decorated his sun, he wanted to arrange the planets all around it – totally his idea.

I had printed out some space coloring pages for Calvin that I found on Pinterest and later I had the idea to use one as a play dough mat. Calvin’s grandpa (my dad) helped him roll some colorful play dough planets. I love this sparkly art project so much! We originally did it during our tot school space week last year, and this year we made mother’s day cards for Calvin’s grandmas and great-grandmas using the same glitter glue and circle sequins. Then, of course, we had to do it again for this year’s space theme, and this time I added some rings cut from gold washi tape for Saturn and Uranus! Also, unlike last year, Calvin was able to really think about choosing colors and sizes for the different planets. If you ask him, he can tell you which planet is which in this picture because he was very thoughtful about it! (And that big gold blob that he’s adding green to in the picture is the sun!) Calvin also says that this was his favorite solar system activity (but I suspect that he only said that for my benefit ;). He’s kind to humor me.)

There are so many great space and solar system activities and projects out there on IG, Pinterest and other blogs! What are your favorites?