We moved here in December and after the evaluation process with our new early intervention organization and new therapists and new insurance, blah, blah blah, Henry’s in-home therapies are finally starting this week.

He has been in feeding therapy since about February, and Calvin’s process with the public school district went a little faster since he already had an IEP from his school in California so he started speech therapy in February also.

The ones starting this week are occupation therapy and speech therapy for Henry. Plus, this week Calvin also had/has two evaluations with the public school district: one for the pre-k program placement, and one to re-write his IEP and determine special education (they call it “exceptional children” here) services for him.

So here’s our therapy breakdown:

Feeding Therapy – Henry does feeding therapy in clinic at the children’s hospital, which is a bit of a drag because it involves driving and paying for parking (oh how I miss the free valet at Stanford!) and packing food.He was doing feeding twice a month, but we’re backing off to once a month because he’s doing so well. His chewing is fine, he’s able to eat all foods and drink all liquids with no problems. His only feeding issue is “overstuffing” meaning that he doesn’t regulate bites. He doesn’t take one bite, chew, swallow, then take the next, he’ll try to just stuff everything on the plate into his mouth at once. So for the most part, I just feed him one bite at a time and keep the other food away from him to try to get him used to swallowing one bite before getting the next. We’ll do monthly check-ins with his feeding therapist. (He also needs work with using a spoon and his pincer grasp, but those are actually occupational therapy skills. Feeding therapy is more about chewing/swallowing/oral motor skills.)

Occupational Therapy – Henry will be doing OT twice a week at home. He’s got a lot of sensory seeking issues that we’re working on. We’re working on getting him to chew on a chewy tube or teething pendant to satisfy his sensory needs so that he can use his hands for play, instead of constantly mouthing all the toys. So, for example, she had him chewing on a chewy tube and working with shape sorting toys where you drop the shape block into the matching slot. During his first two sessions with his new OT, he did great for about half the session, and spent the other half fussing and getting mad. She does lots of sensory breaks for him using a sit and spin and our ball pit to try to calm him down so that he can focus again. Other OT skills he will work on include, pushing buttons with one finger, using a spoon, pincer grasp, and bringing toys together at midline (banging blocks together).

Speech Therapy  – Henry will get speech therapy once a week at home. Our first session with his new therapist is this afternoon! We need a lot of help with Henry’s communication because he’s now at an age where he’s starting to get frustrated and express himself in um, problematic, ways. (Like biting his arms or banging his head.) He’ll be working on some nonverbal ways to communicate like pointing, maybe even introducing picture cards for him to use…. and receptive language stuff like responding to cues and following directions. I’m not totally sure what to expect, but I’ll write an update after a few weeks!

Henry was evaluated for physical therapy, but the therapist didn’t recommend PT at this time, just the new orthotics. She said that for now he just needs more time and practice with walking and climbing, which he gets plenty of through play at home. I said it was totally fine with me! We’ve got enough therapy as it is, and she is a seasoned therapist and I trust her judgement. Plus, he’ll be re-evaluated by the school district in a few weeks anyway because he is about to turn 3 and transition into the school system for services.

Articulation Therapy – Calvin only needs speech therapy, specifically articulation therapy in which he practices specific letter sounds. He has difficulty with his oral motor skills, and his palate muscles are weak. (He was born with a submucosal cleft which was repaired through surgery in March 2015. The surgeon said that his muscles are very thin, so he may be able to strengthen them enough for them to function well, but if not, another surgery will be needed.) I take Calvin to speech twice a week at our neighborhood elementary school and he gets one-on-one therapy for half an hour each time.

Tomorrow he’s got a big evaluation with the school district which will lead to the development of a new IEP for him and which will determine his services for the coming school year. 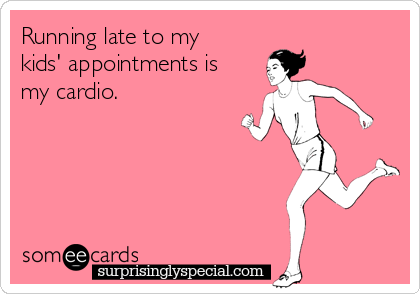 This is the first week of our full therapy schedule and with the two evaluations for Calvin on top of our normal therapy sessions, I swear my head is spinning. I haven’t been able to concentrate on much else. I feel like a mess.

Yesterday, we actually ended up at the wrong clinic for feeding therapy because our usual therapist is on vacation and when we scheduled with another therapist, the scheduler neglected to tell me that it was at a different location. I am sure it was in the reminder email, but it didn’t occur to me that it was a possibility! So when we finally arrived at the correct clinic, twenty minutes late, after having parked – and paid for parking – twice, I actually burst into tears at the registration desk. I was just so stressed, and starving, since I’d fed the kids breakfast but only had coffee myself, that I just couldn’t hold it together and I needed to let something out before I could compose myself. The receptionist was kind and gave me a box of tissues. And thank goodness the new therapist was very sweet and understanding and the session went well. But yeah, I’m a mess.

I’m also anxious about Calvin’s big evaluation tomorrow. It just makes me feel so vulnerable. You fill out the paperwork, send past records, answer questions, and then your kid is on display to show what he can and can’t do… It’s like we’re laying out everything we are and these strangers are going to confer about it and come back and tell us stuff… and surely they’ll see how great he is, right?? People always love Calvin. But as awesome as he is, he has challenges, he’s there for a reason, and  it’s hard to hear the hard stuff from strangers. Plus, he’s older and more self-aware… what if it makes him feel uncomfortable? When he was little, he just thought he was there to play with new people whenever he had evaluations or new therapists. But he’s getting old enough to understand and I wonder how he will come to feel about all of it.

**deep breath** Well, the week’s almost over, and if I make it through tomorrow without crying, then I will have only cried once! 😛

Part of the reason I’m even writing this post is that I know writing about the stressful things helps me process the stress and makes me feel a little better. It’s like I can unload some of my worry here and gain a little space to breathe. So thanks for helping by reading and giving me an excuse to keep writing 🙂