Craniofacial Clinic is one of Calvin’s annual check ups. He has been going to these clinics since he was just three months old, when he was first diagnosed with 22q11.21 Deletion Syndrome. We have attended CF clinics at Kaiser Oakland, Lucille Packard Children’s Hospital at Stanford, and now at Duke Children’s Hospital.

Calvin attends these clinics because he was born with a type of cleft palate called a submucosal cleft. Differences in palate development are common for babies born with 22q DS. With a submucosal cleft, the palate is closed, but the underlying muscles are separated. These muscles are supposed to be connected in an arch which controls the movement of the soft palate. Calvin’s were not connected, which meant that his palate couldn’t move the way it was supposed to.

As an infant, this explained why he was unable to get enough milk from breastfeeding. I had a terrible experience trying to breastfeed Calvin. I tried so hard to make it work. We used a Supplemental Nursing System to try and help him get more milk without giving up on nursing… I was pumping all the time to try to keep my supply up… we ended up having to switch to bottles just to get him to gain weight, and this was hard for me because I was in a very pro-breastfeeding community. It was stressful and emotional and I felt like a huge failure. I still cry when I think about those days of struggling to feed my tiny Calvin. Learning that Calvin had this very real palate defect – although it brought new concerns about his speech and the possibilities of needing surgery – in this one sense it was a HUGE relief to know that it wasn’t my fault that we were not successful with breastfeeding.

At Craniofacial Clinic, Calvin is seen by several different specialists: an ENT, an audiologist (because palate defects can also affect hearing development and ear structures), a plastic surgeon, a pediatric orthodontist, a speech-language pathologist, and a social worker to help us with setting up therapies and services if needed. Each specialist sees each patient separately, so for us it is like having six back-to-back appointments. It takes 4-5 hours including a lunch break. After clinic, all the specialists meet as a team to discuss each child’s case and make recommendations as a group.

For the first two years, no surgery was recommended. They waited until Calvin was old enough to tolerate a scope that could be used to see exactly how his palate muscles were functioning. When he was two, they did the scope and the team recommended a surgery to “repair” his palate muscles, meaning attach them into an arch the way they should be formed to function correctly.

Calvin had the surgery just before his third birthday. In fact, he was still on an all liquids diet on his birthday that year, in recovery from the surgery, so he had birthday smoothies and pudding instead of a birthday cake! The surgery was successful and had no complications. Calvin’s palate muscles are now in the correct shape, though at the time, his plastic surgeon said the muscles were “thin” and we would have to wait and see if they would get strong enough for Calvin to develop correct speech.

In the past two years since his surgery, Calvin’s speech has developed a lot. He still has severe articulation difficulties, but these are not caused by his repaired palate. Speech problems related to his palate would result in hypernasality (nasal sounding voice, the air is going out through the nose instead of the mouth when talking) – that’s the thing the SLP’s listen for to determine whether the palate is functioning or able to function. In some cases, another surgery is needed. 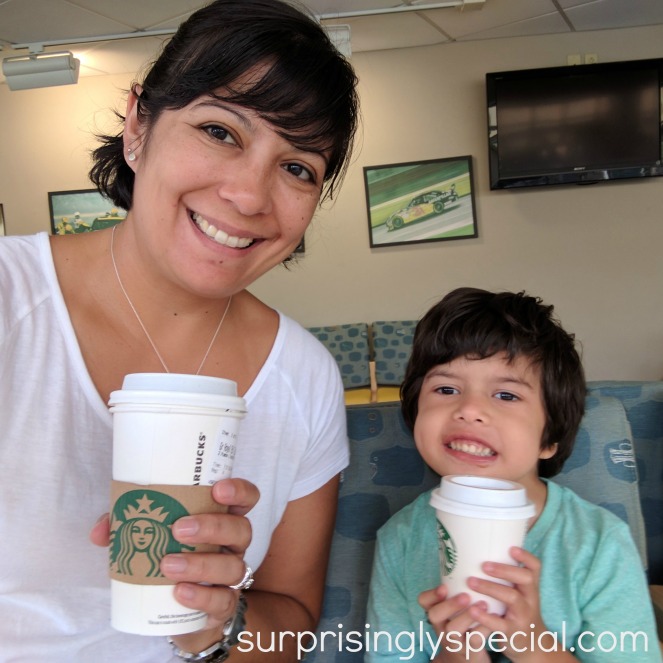 I usually take Calvin to clinic day and James stays home with Henry. This year we stopped at Starbucks (Calvin LOVES Starbucks) for a treat to get us going. Hot chocolate for Calvin, and a tea latte for me 🙂

First up this year was audiology. I was a teeny bit worried because Calvin actually failed the hearing screening at his 5-yr check up and then another one that his speech teacher did with him at school in May… He had failed those two hearing tests, but we weren’t noticing anything problematic with his hearing on a day-to-day basis, and we knew they would test him again at CF clinic. So James and I had decided to wait and see what the audiologists at clinic found since their tests are more in-depth than the regular yearly hearing screenings done at well-child check-ups. *Big Sigh of Relief* because Calvin passed the hearing tests at CF clinic just fine. The audiologist said that it’s common for there to be errors with hearing screenings for kids his age because he might just not have been paying close attention or there might have been background noise.

Next was speech pathology. The SLP (speech and language pathologist) worked with him through some exercises, having him say certain things, make sounds, listening for that hypernasality. *Big Sigh of Relief Again* – The SLP said it sounds like his palate is capable of doing what it needs to do and we don’t need to talk about another surgery (at least for now). Whew. Calvin still has a long way to go and a lot of work to do to work through his articulation challenges, but it’s therapy and not surgery that he needs.

After SLP, we met with the social worker briefly to talk about whether we needed other therapy services. I always end up talking to her about Henry more than Calvin because Henry needs more support!

And then we got stuck in limbo for a long time waiting for our next appointment, so we went down to the main lobby to see the aquarium and the Little World displays and play with the train table. It was a looooooong wait before our next doc was ready for us. I think maybe they were waiting for one of the docs to arrive from surgery??? Something was holding up the process. We also went downstairs for lunch at Einstein Bros during this break. 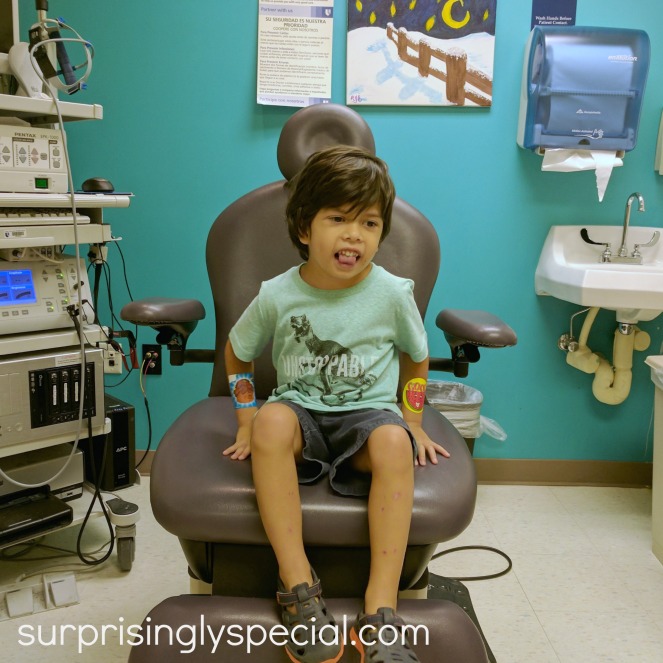 FINALLY we got to go back in to see our other 3 specialists: ENT, ortho, and plastics. Ortho said his teeth look fine, just keep brushing and flossing 🙂 Plastics and ENT looked at his palate and said the same thing as the SLP: looks like another surgery is not needed (at least for now). The only catch was that the ENT saw some white spots on the back of Calvin’s throat… and I was like OMG NOT STREP NOT STREP NOT STREP!!! Because actually Calvin had been saying that his throat hurt that week. So…. we did a strep test and it WASN’T STREP! YAY! But it was thrush. Which was weird because why would Calvin have thrush??

So we left with a prescription for a mouth rinse to clear up the thrush and an appointment with allergy/immunology because thrush can be a sign of immunological problems and kids with 22qDS are at increased risk for immunological deficiencies. Calvin was seen and cleared by immunology as an infant, but we’ll have him checked out again just to be sure everything’s good and it was just a fluke. The thrush actually wasn’t the only red flag that made the ENT refer us to immunology, Calvin also had a case of walking pneumonia last year which is another possible sign of an underlying issue with the immune system.

5 hours later… we were finally done! Ugh, clinic day is a long. freakin’. day. But Calvin is SUCH A GOOD SPORT ABOUT IT. Seriously, this type of clinic day would be a nightmare for Henry. If I have to do these long-a$$ appointments every year, I am so thankful to be doing them with this kid. ❤

Anybody else have clinic days like this for your kiddos? What does your clinic day look like?