Before Fall completely gets away from me, though after Thanksgiving it already feels like winter! – I wanted to drop a quick recap of our very busy season. 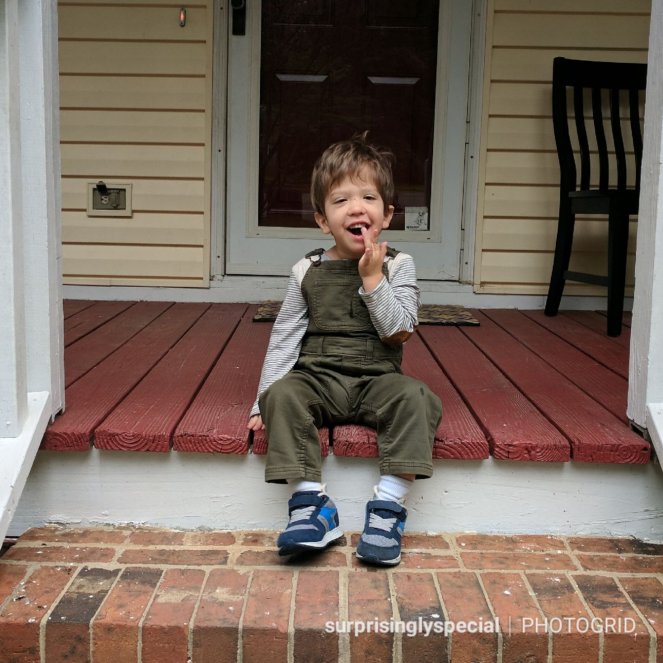 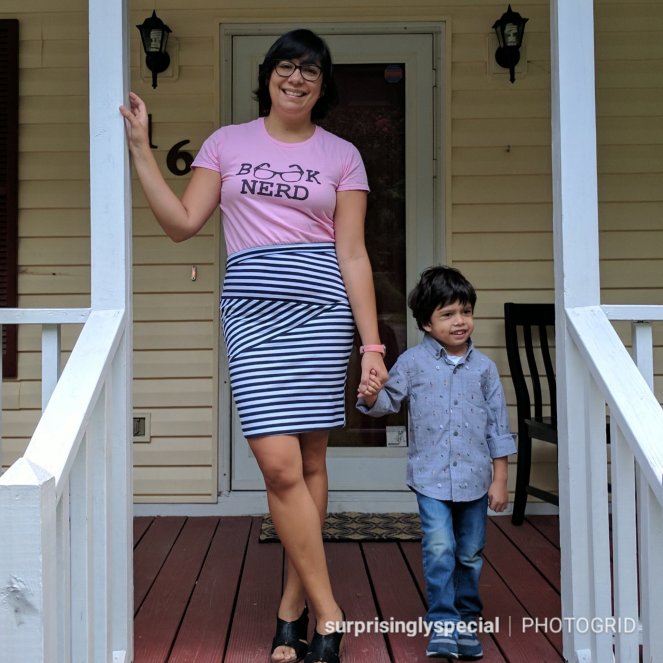 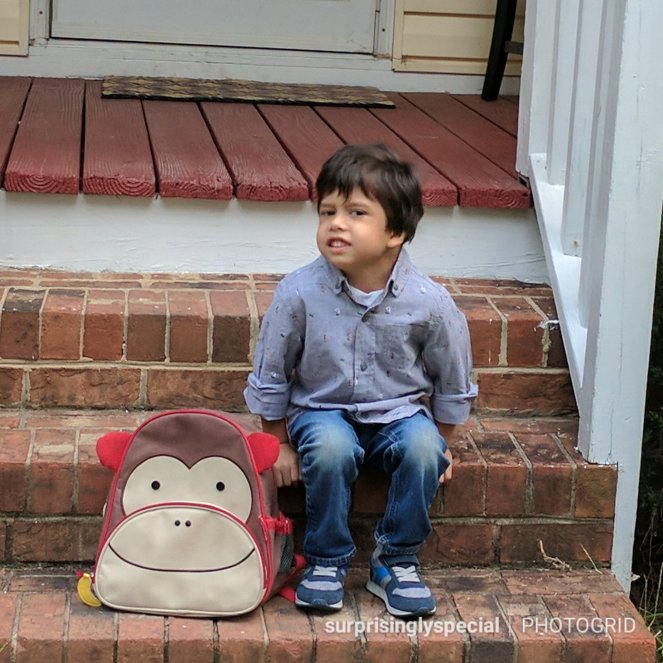 These are pics from Henry’s, Calvin’s, and my first day of school! Calvin still goes to the school where I am teaching, and Henry is at a new school this year which is a brand new preschool center in our district. He is in a special education Pre-K class where, at the moment, he is one of only three students! They have one teacher and two assistant teachers, so it has been awesome to have him in a class with a one-to-one teacher to student ratio! I believe they will be getting a couple more students as the year goes on.

Henry has been doing really well in his new class. He is learning to follow classroom routines and to sit on the rug for circle time which amazes his dad and me! He continues to get physical therapy, occupational therapy, and speech therapy at school. Henry has an upcoming evaluation with teachers from the Adaptive and Augmentative Communication Department in our school district to try to determine what types of communication tools might be helpful for him. (Probably PEC’s, which his speech teacher has already been introducing to him.)

I still love teaching first grade, with all of the challenges and the joys that come with teaching public school. I spent my Saturdays this fall taking an ESL certification class to prepare for getting this certification added to my teaching license. I have done ESL course work in college and grad school, so this was a good refresher to help me improve my instruction for my students who are still emergent in English.

Saying Goodbye to my Grandmother 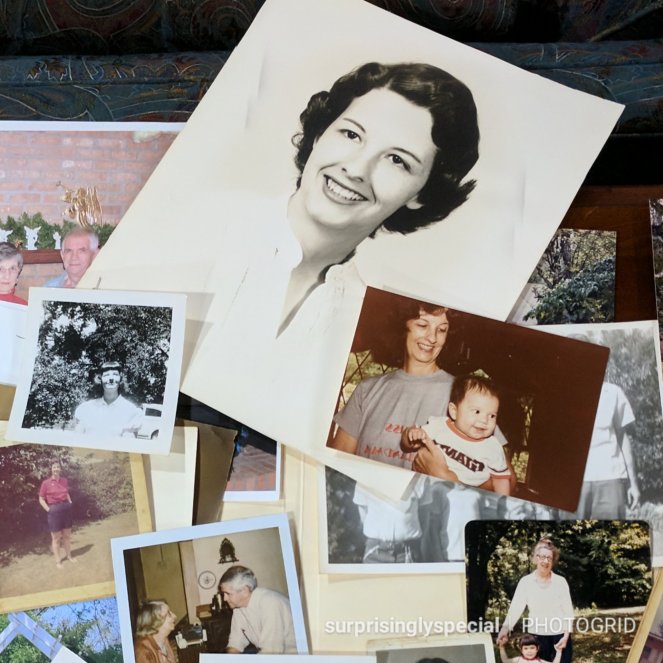 On the day after Henry’s birthday in the summer my wonderful grandmother, Mama Sheila, passed on and was finally relieved of the pain that she had been living with for the past several years. In September, the family gathered for a memorial to celebrate her.

Mama Sheila always made me feel like I was special to her. She made me feel like everything I did was important. She kept in touch with me even when I moved across the country from her; she kept up with my life, my husband, my children, with keen interest and love. She always praised my writing and encouraged me as a writer from a very young age. She was an English professor at the University of Georgia, so she knew what she was talking about, but I know she was biased about me 🙂

She was the most avid follower of my blogs. Her absence has a lot to do with the fact that I have not written a post in so long. I did not feel motivated to write, knowing that she was not there to read it. If my grandmother is no longer there to read my writing and care about my stories, then who is? She cared about my blog more than anyone else, so if she’s gone, what’s left?

But, I didn’t start blogging just for my grandmother. I have this blog to share our stories with whoever cares to read about our family. I still believe it’s important to tell our stories, especially for the other 22q  and Dup15q families like ours out there. So here I am. Missing my grandmother, and blogging without her. 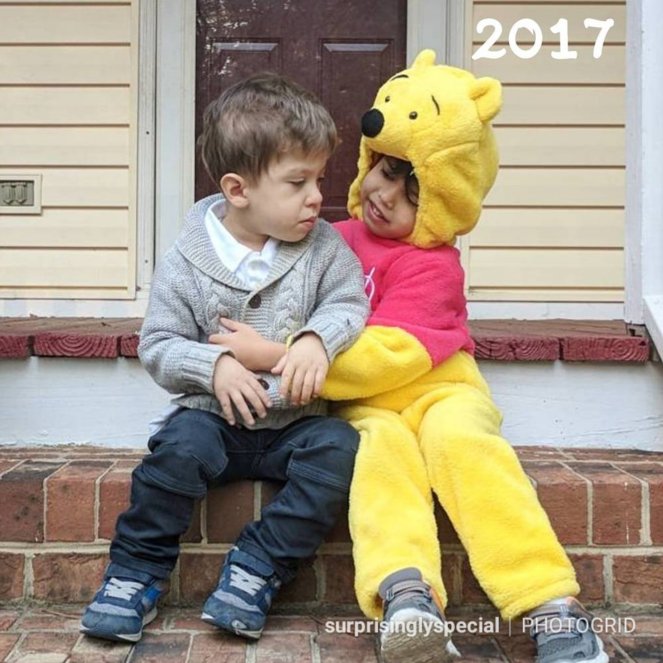 Calvin was really into Halloween this year which made it really fun. Since Calvin was about two, I have planned our family costumes around whatever he wanted. Henry’s only opinion about Halloween costumes is that he does not want anything that he has to wear on his head. This year he was Christopher Robin to Calvin’s Winnie the Pooh and James and I dressed up as Tigger and piglet, although we kind of phoned it in with pink and orange hoodies paired with Tigger and piglet ears on headbands. James made the comment that we are getting progressively lazier with Henry’s costumes… It’s easier to dress him up as a human because that doesn’t involve a hood or a headband or a mask. But this year it didn’t look like he was wearing a costume at all, unless you knew he was supposed to be Christopher Robin

Oh well. We’ll try and think of something more creative next year. I still think he and Calvin looked very cute together! 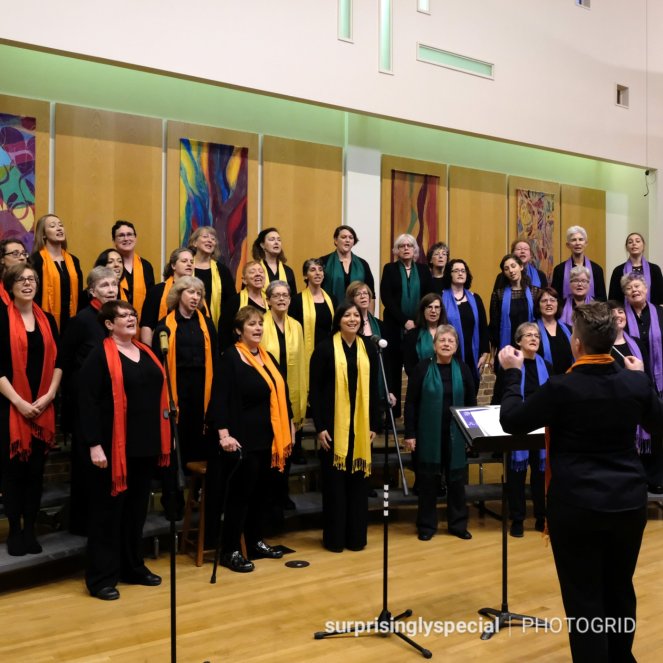 This fall I sang with a choral group called the Common Woman Chorus. It was awesome getting to sing with this group of ladies!

I sang in choirs from the time I was in elementary school through college. Then in 2016, after more than 10 years had passed since my college choir days, I started singing with the choir at our UU Fellowship. I heard about the Common Woman Chorus in the spring and went to their concert in May, and I was so impressed that I just had to join them! The music was challenging and the performance was very rewarding. I even got to sing a solo on a great mashup of Cyndi Lauper’s True Colors and Sara Bareilles’ Brave, called Truly Brave.

I have to really thank James for helping me carve out the time for this hobby even though sometimes my rehearsals conflicted with his commitments as chair of our local bike advocacy group. It’s not easy to have full-time jobs and two small kids and hobbies! 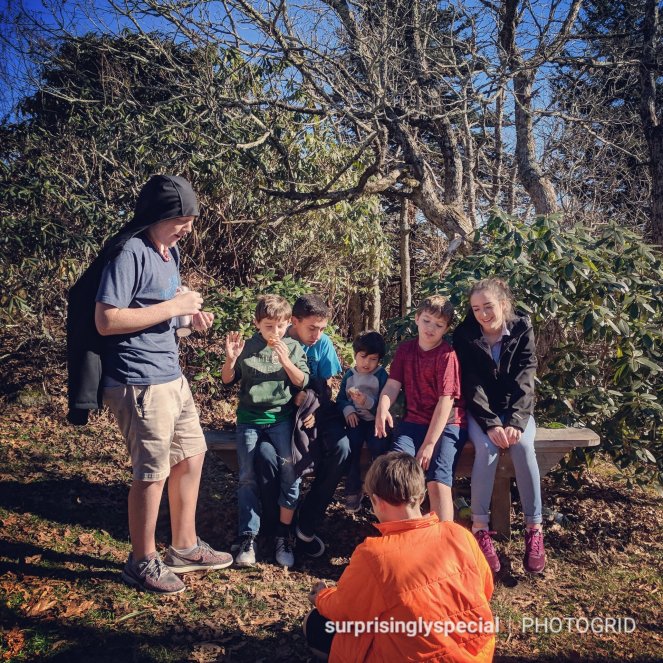 We had a really nice Thanksgiving this year and we got to visit both my side of the family and his side of the family. It’s funny, I feel like so often we have awesome family visits and then no pictures to show for them because we were too busy enjoying ourselves and didn’t stop to take any pictures! So the only nice picture I have from Thanksgiving is this picture of Calvin and his cousins at the top of Brasstown Bald where we went for a hike the day after Thanksgiving.

The kids did really well on the road trip and while visiting my grandfather and James’s parents. In the past, it has been really hard with Henry because it’s just hard to visit houses that are not “Henry-proof” where he would want to run around and touch every little breakable thing he could possibly find! But this year we felt like he did much better with leaving things alone that he is not supposed to touch, and all the family members were really patient with him. We still had to watch him pretty closely, especially when he and Calvin were trying to run around my grandfather’s living room… But in general we felt like the boys did really well this year and we also felt like our family members were super helpful and patient with the boys.
We are easing into the holiday season and getting used to the cold as winter approaches. This morning James and Calvin rode in our city’s Christmas parade with the bike advocacy group that James chairs. (Henry and I stayed home… Henry does not do parades!) I hope that you and your families had a nice fall and are enjoying the emerging holiday season.

Here are a couple more pics of some fun things we did this fall: 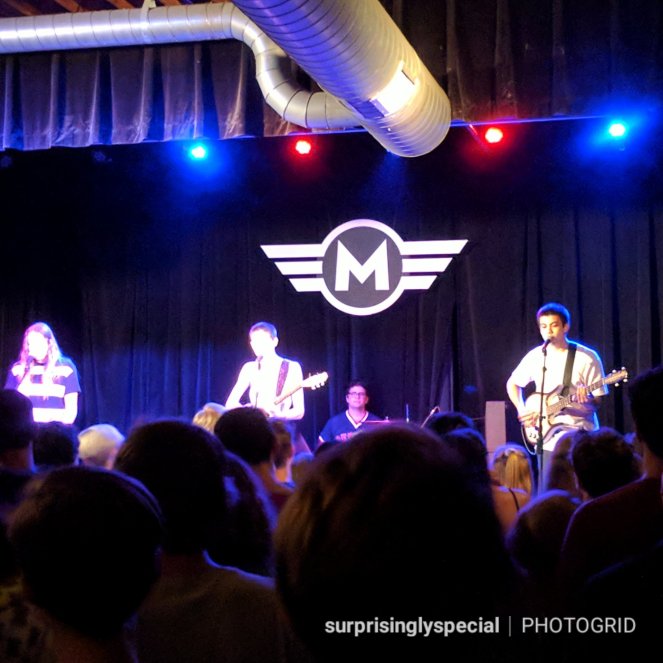 My baby brother Alex is a rock star playing bass for a band called Frankie Cosmos with lead singer Greta Kline. NBD. Alex and Greta also have another musical project that they call Lexie, which is basically just the two of them. And it’s adorable.  Anyway, when Frankie Cosmos went on tour in September, they made a stop right here in Durham! So James and I and some of our friends went to see them perform and I was totally starstruck and so super proud of him!! 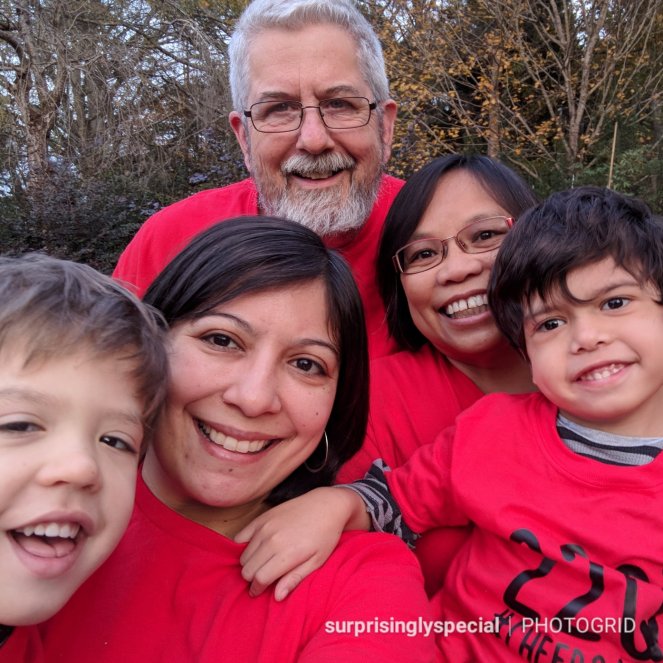 November 22nd is 22q Awareness Day so we rocked our awesome 22q shirts made by my friend’s Etsy shop, The Sparrows Creations, to show our love and support for all the 22QTs out there! 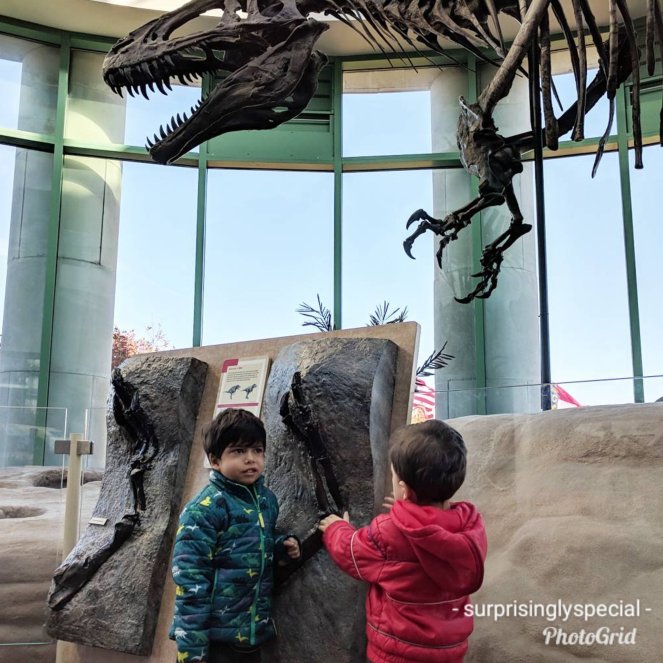 Veterans Day was the perfect day to go visit the North Carolina Museum of Natural Sciences! I love this place. It is a free science museum in downtown Raleigh. Veterans Day was perfect because lots of kids were still in school and lots of people were still at work, but the state legislature was not in session so there was plenty of free parking all around downtown Raleigh and the museum was not crowded at all. The boys had fun checking out the dinosaurs, of course. That Acrocanthosaurus skeleton is basically the main reason why we visit this museum. 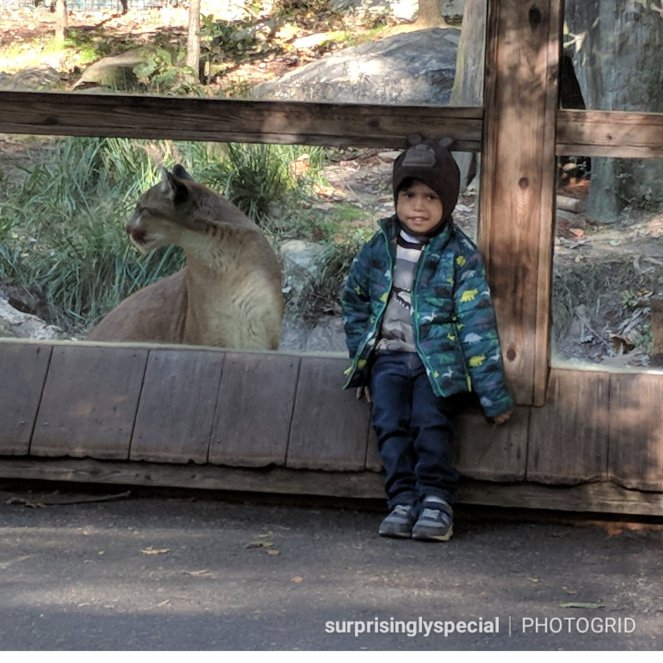 Fall is also an awesome time to visit the North Carolina Zoo in Asheboro. It’s a beautiful zoo and it’s so lovely when all the trees are changing colors.
Okay that was more than five things! But it was long overdue. Thanks for reading 🙂